Milarepa is remembered for his remarkable determination and personal growth. His inspiring story traces the very familiar, human progression from confusion to clarity. Early in his life, Milarepa came to understand tenents of both privilege and oppression.

Though born to a wealthy family, the death of Milarepa’s father left him and his mother at the mercy of his aunt and uncle, who put them to work as servants for their own family. At his mother’s request, Milarepa studied the craft of black magic to be better able to retaliate against their cruelty. Not only was he successful in mastering these magical abilities, he promptly used his skills to take the lives of his aunt and uncle’s entire family.

In this way, Milarepa had invited an immense amount of negative karma into his life as a young adult. Soon after committing these crimes, Milarepa’s joy at having aided his mother began to fade, making way for inescapable remorse. This transformation led Milarepa to seek out a master teacher.

“Milarepa’s life story shows how one can progress from being caught in the cycle of confusion, known as samsara, to becoming a student entering and practicing the path of dharma, to eventually becoming a teacher oneself and taking on the responsibility of training others.”

It was not long before Milarepa found Marpa the translator, a Tibetan Buddhist teacher. Marpa was able to see Milarepa’s potential, but knew that the young man would have to process his remorse and uncertainty before beginning his time as a student of the dharma. In order to guide him to a place of preparedness, Marpa set Milarepa to his legendary task of building, destroying, and rebuilding stone towers. This process was intended “to purify the negativity of his past actions, so that Milarepa could begin his studies with fewer obstacles.”

Marpa’s challenge pushed Milarepa “almost to the point of suicide before he agreed to take him on as a student.” Thus began Milarepa’s journey to becoming the yogi and poet that he is remembered as today. He began his simple, solitary lifestyle, living in caves. He often wore little clothing, even in the winter months, and became known as “the cotton-clad one.” Though he did not seek students, word of his practice traveled, and he was sought out by many. It is said that Milarepa “engaged with whoever approached him,” and it is through his teaching that his spontaneous songs and poetry were shared.

Milarepa’s poetic teachings have touched the hearts of his students and admirers for nearly a thousand years. His life represents that of an ideal Bodhisattva, as his deep compassion created the wish of Bodhicitta and motivated him to obtain Buddhahood for the benefit of all sentient beings. 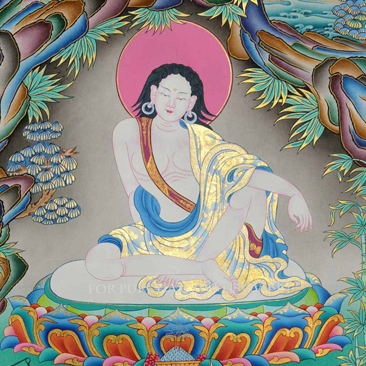 Another short biography can be found here

A Few Books in English:

The Life of Milarepa: A New Translation from the Tibetan
by Heruka (Author), Lobsang P. Lhalungpa (Translator)