Garchen Rinpoche has offered the Milarepa Buddhist Center of Iowa the possibility of having a teacher come to the Milarepa Buddhist Center to be our resident lama. His name is Khenpo Thupsang and he is already living in the United States at the Garchen Institute. We expect Khenpo Thupsang to arrive in Iowa City sometime in either May or September depending upon conditions for travel during the pandemic. We are really excited about welcoming Khenpo into our community and will keep you all informed of our progress.

Khenpo Thupsang was born in Tibet and had his early training at the Gar Monastery in eastern Tibet. He later had nine years of Dharma education at Dzongsar Khyentse Chokyi Lodro Institute in Chauntra, India.

Khenpo Konchok Thupsang was born in eastern Tibet not far from Gar Monastery. His father, a devout Buddhist practitioner and respected physician, taught Thupsang reading and writing, as well as, giving him inspiration to follow the Dharma teachings.

Khenpo Thupsang entered the Kagyu Monastery in Tibet at the age of 15 and he further studied sutra and tantra in the Dzongar Buddhist College. Since then, Khenpo has been abbot and teacher at the Lhagon Jangchub Choling Buddhist Cultural Society in India for several years. 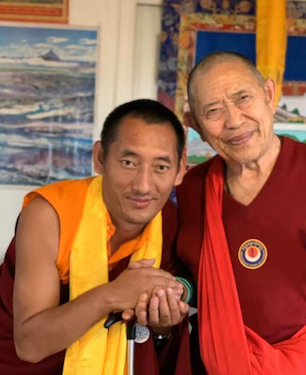