In 2012 Ellen Marie Lauricella and Naomi Bloom moved to Iowa City from Ohio. Through the inspiration and encouragement of their teacher, Eminence Garchen Rinpoche, Ellen Marie and Naomi had established his center, Gar Drolma Buddhist Center in Dayton, Ohio. The two served as President and Vice-President at Gar Drolma from 2002 until 2010.

In 2016 Khenchen Rinpoche suggested we start a Dharma Center in Iowa City
Then, in the Spring of 2016  Ellen Marie and Naomi invited Khenchen Konchog Gyaltshen Rinpoche to come to Iowa City.   You may have been present at Khenchen’s teachings, held in the Art Building West on the UI campus.  If you were, you will understand how inspiring it was for all those present.  Attendance was high, and so were the spirits of everyone present. 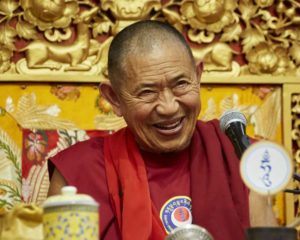 In June of 2017 His Eminence Garchen Rinpoche became Spiritual Director of Milarepa Center of Iowa.  We are so happy and to have the spiritual blessing lineage from Rinpoche here.

We offered Sunday morning practices and discussion.
We offered 3 mindfulness meditation sessions each week.
We offered Achi Chokyi Drolma practice which attracts people from all over the world.

March 2021
In March we began offering a class on the 37 Practices of a Bodhisattva led by Khenpo Thupsang.

February, 2021
We offered Daughters of the Buddha Have No Fear Discussion with Khenmo Drolma.

January, 2021
Gabriela led a Meditation Marathon which enabled people to meditate together seven nights a week for 30 days.

January, 2021
In early 2021 we offered a book discussion on The Progressive Stages of Meditation on Emptiness.

June, 2020
In June we offered a book discussion on The Practice of Lojong by Traleg Rinpoche – led by Tim Mullaney.

October, 2019:
In October we moved to the Heinz Road location.

May, 2019 :
In May we hosted Ina Trinley Wangmo to teach in Iowa City for the first time.  Ina has served as Garchen Rinpoche’s translator for over ten years.  She taught on the Four Thoughts that Turn the Mind to Dharma.

April, 2019:
In April we hosted Drupon Rinchen Dorje who gave us the Vajrasattva  empowerment.  In addition, Drupon offered us teachings on the Prayer of Kuntuzangpo.

March, 2018:
Visiting scholar of Tibetan Buddhism Yaroslav Komarovski, Ph.D. taught on Contemplative Techniques of Calm and Insight Across Buddhist Traditions at the ICPL.

February, 2018:
Khenpo Paljor Gyatso taught on the Fundamentals of Buddhism.

January, 2018:
Two Tibetan nuns, Yuan Hao and Yuan Fei,  who delved systematically into a thorough study of Buddhism in one of the largest Tibetan Buddhism Academy in the world will visited us and taught at the ICPL.

September, 2017:
Retreat with Drupon Thinley Ningpo Rinpoche:
Compassionate Mind, Heart of Peace. Rinpoche’s visit included a Green Tara Empowerment & teachings as well as an Introduction to Tibetan Buddhism and Teachings on the Nature of Mind.

May, 2017:
In May we co-hosted a One-Dharma picnic along with the Iowa City Zen Center and Iowa City Sangha (now Winding Path Sangha).

February, 2017:
In February we co-hosted a One-Dharma vegetarian potluck at our center.

October, 2016:
In October Drupon Rinchen Dorje offered a White Tara Empowerment, White Tara Teachings and Practice and Teachings on the Life of Milarepa.

April, 2016:
Khenchen Konchok Gyaltshen Rinpoche taught on the topic Loving Kindness and Compassion: The Source of All Happiness and Joy. In addition Khenchen gave a two-day teaching on The Display of Discursive Thought & the Natural Radiance of Awareness.

It doesn’t matter whether one calls oneself a Buddhist or not a Buddhist. The Dharma is love. When you see how your love touches others, it will become your happiness to give your happiness away. What is called ‘blessings’ is nothing more than love. If you are self-centered, your mind becomes narrow, like a block of ice. But when you let go and send out love to others, you will notice how your mind expands. The mind becomes open and spacious, like a vast ocean or the sky. When you give rise to love for sentient beings, then we are exactly the same. Ultimately, self and other are just thoughts. When we see that, we are not separate from others, we begin to fathom the preciousness of compassion, of bodhicitta. Love is the only cause of happiness. Its nature is all-pervasive like space. Love is the sunlight of the mind.