The village of Tsari and the surrounding areas are among the most sacred places in Tibet. It was there that the most Venerable Khenchen Rinpoche Konchog Gyaltsen was born in the spring of 1946, and it was there that he spent his early years. In 1959, because of the political situation in Tibet , Khenchen Rinpoche fled to India with his family. The family then settled in Darjeeling, where Rinpoche began his education. At a young age, Rinpoche was an excellent and dedicated student, and was able to complete his middle school studies in less than the average time.

At about this same time, a new university, the Central Institute of Higher Tibetan Studies, opened in Varanasi, India. Determined to be among its first students, Khenchen Rinpoche traveled to Varanasi , in October 1967 to seek admission. He then began a nine-year course of study that included Madhyamika, Abhidharma, Vinaya, the Abhisamayalankara, and the Uttaratantra, as well as history, logic, and Tibetan grammar. In early 1968, he had the good fortune to take full monastic ordination from the great Kalu Rinpoche and, shortly after graduating from the Institute, he received teachings from the 16th Gyalwa Karmapa on The Eight Treasures of Mahamudra Songs, by the Indian mahasiddhas.

After completing this long course of study, Khenchen Rinpoche wanted to deepen his knowledge and practice of the Dharma. With the same intensity that he brought to his earlier studies, Rinpoche sought out and received teachings and instructions from great Buddhist masters. One was the Venerable Khunu Lama Rinpoche, with whom Khenchen Rinpoche studied two works of Gampopa The Jewel Ornament of Liberation and The Precious Garland of the Excellent Path. Rinpoche’s studies with the Venerable Khunu Lama also included Mahamudra and many of the songs of Milarepa.

In all his studies, The Jewel Ornament of Liberation was one of the texts that Rinpoche found to be most inspiring. In The Jewel Ornament Lord Gampopa lays out the teachings in a clear and systematic way that is understandable to beginners. At the same time, the work is of such profound depth that scholars and practitioners can study it over and over and still not fully grasp its meaning. Khenchen Rinpoche has said on several occasions, “Anyone who knows the Jewel Ornament well can say that they really understand Buddhism.”

Maintaining a balance between theoretical understanding and the practice of meditation, Khenchen Rinpoche began a three-year retreat in 1978 under the guidance of the enlightened master Khyunga Rinpoche. During this time, he was able to deepen and enhance his understanding of The Five-fold Path of Mahamudra and the profound Gong Chik text of Lord Jigten Sumgon. He also received many other transmissions. In 1985, Khenchen Rinpoche traveled to the main seat of the Drikung Kagyu lineage, Drikung Thel, in Tibet. There, he received instructions and transmissions of Mahamudra and the Six Yogas of Naropa from the enlightened master Venerable Pachung Rinpoche.

In 1982, the force of karma and the requests of many practitioners combined to bring Rinpoche to the United States. By late 1983, the Tibetan Meditation Center was well established in Washington, DC. The Tibetan Meditation Center was the site of innumerable teachings, practices, retreats and ceremonies. In September 1984, and again in 1987, the young Center was blessed with personal visits and teachings by His Holiness the Dalai Lama. Through Rinpoche’s and the Center’s efforts, Drikung Kyabgon Chetsang Rinpoche visited later in 1987, and people in several states were able to receive benefit from his teachings and presence.
Wanting the teachings of Dharma to reach as many people as possible, Khenchen Rinpoche quickly adapted himself to Western forms of communication. He made appearances on television, has been a guest on many radio programs, lectured extensively at colleges and universities, and has spoken to the public through countless newspaper articles. Between 1983 and 1990, Khenchen Rinpoche singlehandedly translated over 30 critical Drikung Kagyu practices, prayers and histories into English. This priceless work formed the essential base from which the Dharma could be taught and practiced in the West.

In 1991 the Tibetan Meditation Center moved to Frederick, Maryland. Nestled inside a state park, the Center is now situated on four wooded acres. With this larger facility and in surroundings more conducive to contemplation, Rinpoche was able to benefit even more people with his teachings.
In 2001 Khenpo Konchok Gyaltsen received the high honor of being enthroned as Khenchen (great abbot) by His Holiness Drikung Kyabgon Chetsang Rinpoche at Jangchub Ling monastery, Dehra Dun, India.
In recent years, Khenchen Rinpoche spends a great deal of his time traveling in order to give teachings and lead retreats. He has established centers throughout the US and in Chile, and he frequently visits in Europe and Southeast Asia. Rinpoche consistently strives to make important texts available to the public and to provide his students with thorough and systematic training in the Dharma. A skilled and dedicated translator, he has published 14 books in English. Rinpoche’s writing has been a central resource in the introduction of Buddhist thought in the West.

Rinpoche has taken enormous care to make translations as precise as possible. Because he himself has been so moved by these words that come directly from great masters, he believes it is critical that these same words be presented in an unadulterated manner. Rinpoche and his translators, working as a team, have applied painstaking effort to the task of tranlsation. It is his sincere hope that, through this effort, many others will be as inspired as he was by these precious Dharma teachings.

Remembering the struggles of his early years, Khenchen Rinpoche inspires and supports monks, nuns and lay people in their practice of the Dharma and is always ready to assist them in whatever way he can. To all, he gives of himself freely. With his heart and mind turned firmly toward the Dharma, he compassionately and patiently shows the way to compassion and wisdom.

Khenchen Konchok Gyalten Rinpoche came to Iowa City in the spring of 2016.  That visit laid the foundation for the formation of the Milarepa Buddhist Center of Iowa. 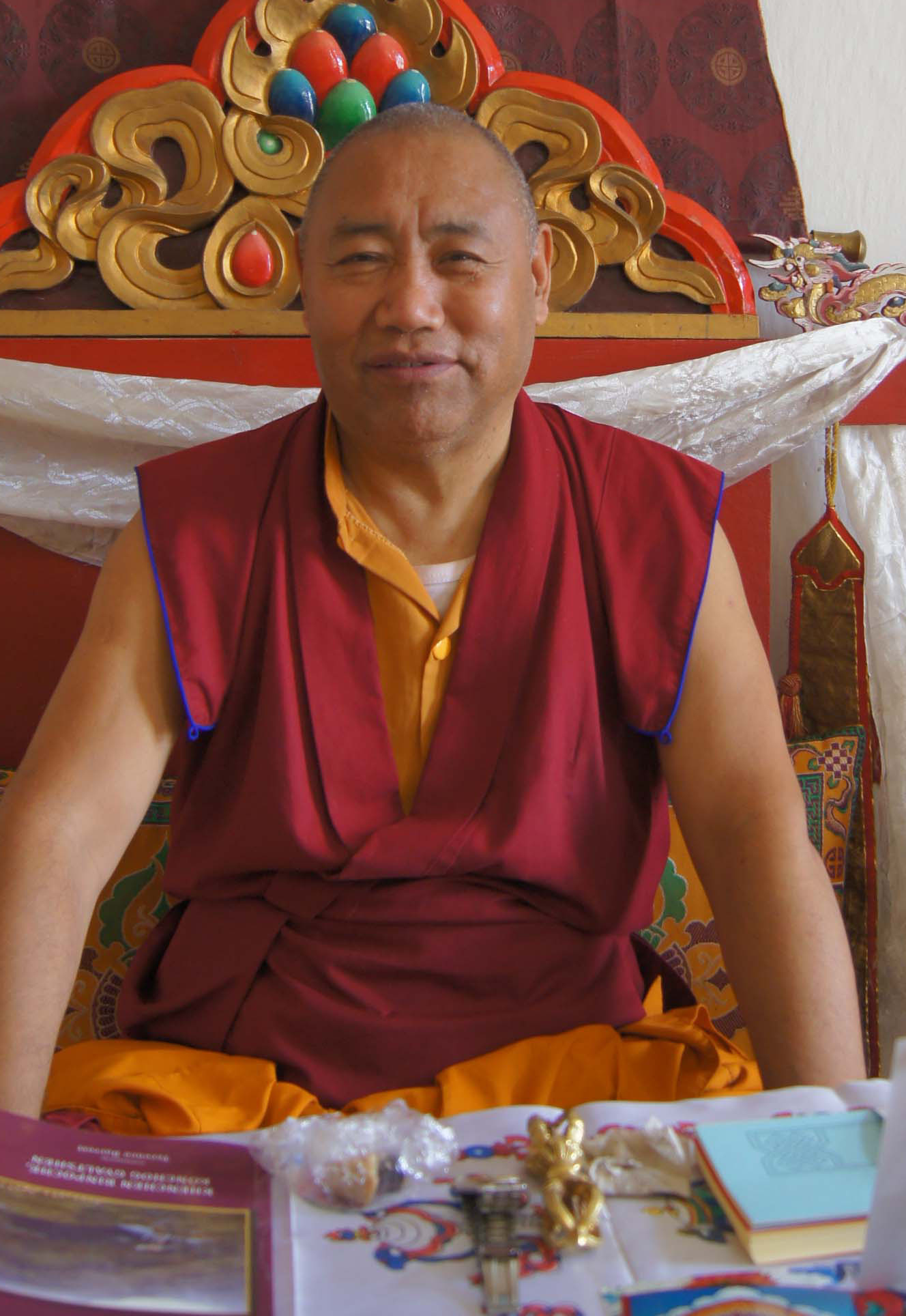